skip to main | skip to sidebar

Last night I journeyed to the Hammersmith "Liver Damage" Apollo to see a band that recorded one of my favourite albums of all time, that band being Journey. Me and a 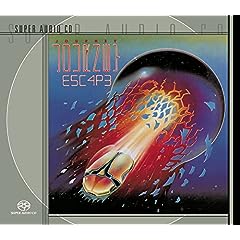 friend from work left Bemuddlement Towers at around 5:30pm and by 6:40pm we were outside "the Trout" for the traditional imbibing of the pre-gig foaming Pevo. Suitably refreshed, we then headed for the venue.
Inside was heaving, however the merchandising was curious. No tour programmes but a rather nice selection of T-shirts, hot pants and even a Journey styled Soccer shirt. Given that the average audience age was approximately between 35 and 90 I suggested that maybe a stylish blazer would have been more appropriate, but sadly, none were available.
The support started at 7:45pm. I hate support acts, they just irritate me. I explained to my colleague that I have felt this way since I saw the lead singer of the "House of Lords" badly injure himself trying to slam dive into the crowd at an Iron Maiden show in December 1989. I think the phrase "the crowd parted like the Red Sea" was involved somewhere. My friend bought a tour T-shirt... I did not. I gave all mine to charity in 2005... I think I still have my "Page and Plant Unplugged", but I maybe mistaken. I have yet to open all the boxes that went into storage in 2006.
So, having elected to skip the support act, it was time for another beer. At the Carling Apollo, all you can by is Carling Lager... we should've stayed at "The Trout".
Journey came on at 8:45pm and left at 10:40pm.... they were brilliant. Please refer to other sites for detailed reviews.
I sat next to a fat Greek. I know this, because he was texting throughout the show using the Greek alphabet... he may have been a Greek Scholar, but he didn't look the sort.
One train ride and a Steak and Guinness pasty later, we arrived back at Bemuddlement Towers. I showed Mrs Bemuddlement a clip I recorded on my mobile phone. It was unintelligible.
Next month I'm seeing James Taylor. Nobody I met last night was impressed... especially the Toto fans.
Posted by Bemuddlement at 5:19 pm